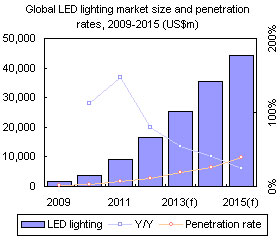 Compared with introduction period of previous years, in 2011 LED lighting growth has slowed, mainly because 2011 LED prices drop avalanche occurred, the beginning of the current price of only 11 to 30%. Overall shipments have doubled in growth, but output growth of around 40-50%.

In next two years, LED lighting demand will remain around 100% annual growth, but by the impact of lower prices, output growth will be lower than the demand.