“When I walked, I found that the light in the park is very good, and it is safe to take children out to play.” Xiong Wei said that recently the street lights in Qingshan Lake Sports Park at night have not only become brighter, but the “value” has also improved a lot. 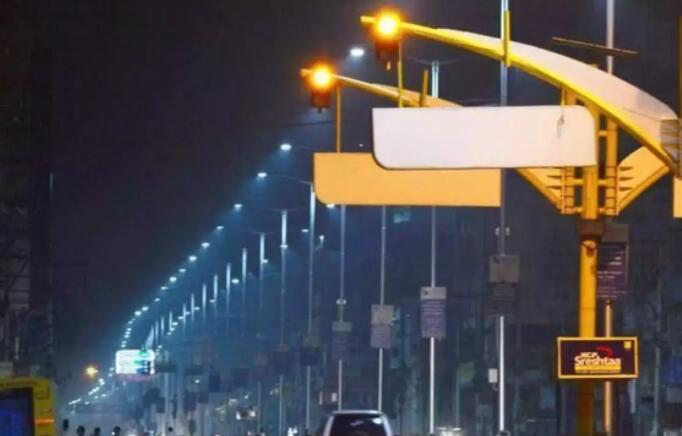 The changes in the street lights of Qingshan Lake Sports Park benefited from the comprehensive renovation and upgrading of more than 90,000 street lights on 54 major and minor roads, including Shanghai Road, Yangming East Road, and Qingshan Road by Nanchang Street Light Management Office. Change to today’s energy-saving LED street lights.

“The high-pressure sodium lamps used in the past are indeed not durable, and the new ones are LED energy-saving street lamps that are not easy to break.” Liu Yigang, deputy director of the Nanchang Street Lamp Management Office, introduced that LED street lamps are highly efficient, safe, energy-saving, environmentally friendly, long-lived, and responsive. The unique advantages such as fast speed and high color rendering index can improve the lighting effect and also play a role in energy-saving and emission reduction.

Because of this, in view of the previous characteristics of urban street lights that are easy to break, lack of light, and high energy consumption, Nanchang last year listed the urban road lighting energy-saving renovation project as one of the top ten livelihood projects of the Nanchang Municipal People’s Congress in 2020.

Liu Yigang told reporters that the iterative upgrade of more than 90,000 street lamps on 54 main and secondary roads, including Shanghai Road, Yangming East Road, and Qingshan Road in Nanchang, has been completed, all of which have replaced high-pressure sodium lamps with LED energy-saving lamps. The LED energy-saving street lamp adopts the silicon substrate LED chip technology “manufactured in Nanchang”. During the implementation of the project, the Nanchang Street Light Management Office also paid great attention to the on-site light environment experience of pedestrians and vehicles, emphasizing the overall coordination of the lamps and the surrounding environment and the comfort of the human body, and specially selected the medium and low color temperature light sources with the color temperature of 3500K warm white light. It doesn’t look dazzling.

“The energy-saving rate after the transformation reached 40%. After actual measurement, we found that the quality of the LED lighting on 54 main and secondary roads is better than the national standard.” Liu Yigang calculated an account for the reporter: the total energy consumption of 54 roads and street lights before the transformation the power is 2475.75 kilowatts, and the total power after the transformation is 1523.38 kilowatts. Based on the average lighting time of street lights for 10 hours a day, and the electricity price of street lights at 0.61 RMB per kilowatt hour, the electricity bill can be saved by 5,504.45 RMB per day, and at least 165,000 RMB a month.

Careful Nanchang citizens will find that street lights were often on during the day on the streets, but now the newly installed street lights will not happen again. This is mainly due to the empowerment of science and technology, and the more than 90,000 street lights in Nanchang City have become more and more “smart”.

Liu Yigang introduced to reporters that all current street lamp switching times are automatically judged and automatically generated according to the daily sunrise and sunset time and light conditions through an intelligent monitoring system. As the sun rises and sets time, as well as the sunshine duration and light intensity of the sun in different areas of Nanchang are different from day to day, so the street lights switch time in Nanchang city will be different every day.

“The purpose of this is also to save energy.” Liu Yigang said that the establishment of an intelligent monitoring system can not only accurately make the city’s street lights and landscape lighting lights automatically switch lights according to different weather conditions and activity needs, but also Line failures were discovered in time. The original street lamp failures were mainly discovered through inspections by the staff. From discovery to repair, it usually takes 3 days. Nowadays, through the empowerment of science and technology, through the installation of a single lamp control terminal in the lamp pole, the intelligent detection of the current, voltage and other parameters of the lamp can be realized. If the street light fails, the back-end staff will be dispatched to the maintenance personnel through the work order system as soon as possible, which greatly reduces the pressure of the patrol light duty personnel and the loss of vehicles.

“As the urban framework of Nanchang continues to expand and the total number of lamps continues to increase, we have mainly adopted a series of comprehensive measures such as energy-saving control, material energy-saving, equipment energy-saving, and management energy-saving. We have achieved a year-on-year decrease in the energy consumption of urban street lighting in Nanchang. “Liu Yigang told reporters that Nanchang is currently implementing the intelligent transformation and upgrading of 10,000 poles of single-lamp control. In the future, it will continue to increase the intensity and breadth of urban street lamp renovation in accordance with the requirements of the increasingly information and digitalized street lighting management. Serve the people well.