The main customers of street light is government, rather than ordinary consumers, and thus it is a more special, relatively closed industry. Street lights from the initial sodium lamp, mercury lamp to the current LED lights, has a long process of development. At the same time, in the development process it encountered some technical problems. 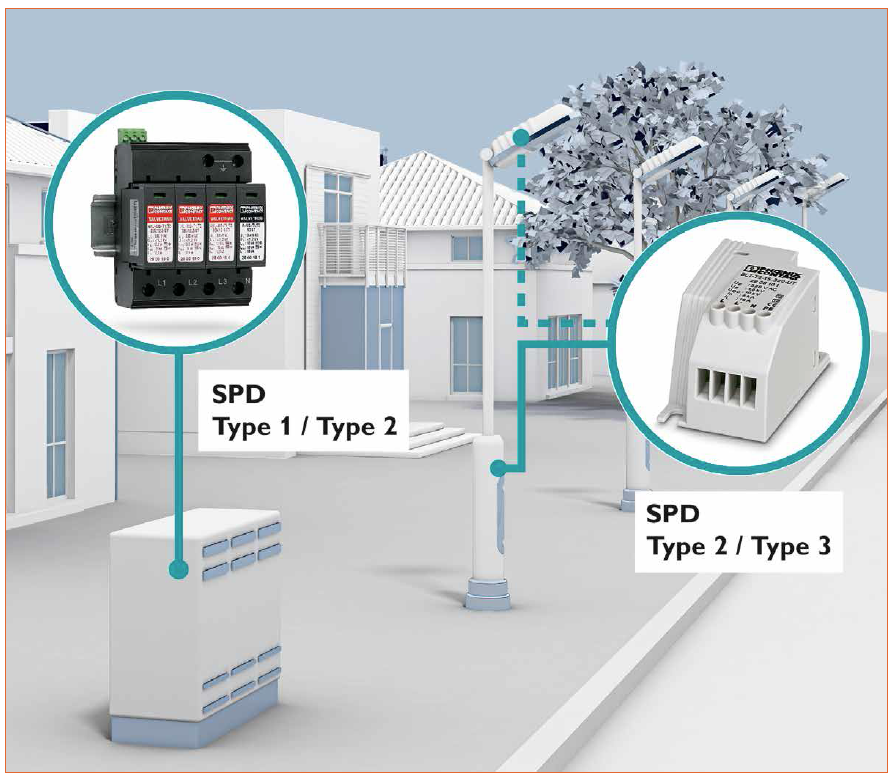 Today, LED lights in the country has been about 10 years, including power supply, driver, cooling technology. Lighting is a kind of electrostatic discharge phenomenon, and usually carrying millions of volts from the clouds to the ground or another clouds. During the transmission process, lightning will generate an electromagnetic field in the air, inducing the kilovolt voltage (as surge) to the power line and generating an induced current to a few miles away. These indirect attacks usually occur in outdoor exposed wires such as street lights, traffic lights, base stations and other equipment to launch surge. Surge protection module is directly facing the front of the circuit from the power line surge interference. It will surge energy transfer or absorption to minimize the threat of other working circuits, such as LED lighting in the AC / DC power unit and other equipment.

For LED lights, lightning in the power line generated induction surge, the surge of energy in the wire will produce a surge, that is, the surge wave. The surge carries out the sensor through this way. A surge Wave to the outside world will be in the 220V transmission line in the sine wave to produce a tip. The tip into the street, and it will damage the LED street lamp circuit.

In fact, in the past the use of high-pressure sodium lamp and the traditional mercury lamp is designed with high-pressure light bulb, which itself has the effect of lightning protection. In fact, in the past, in recent years, LED lights gradually popular, LED lights need to supply voltage is small, usually using the power supply to convert AC power to DC drive, which makes the LED street light itself is not mine, and therefore need to design for the street lightning protection module. Surgery, optical technology and other new breakthroughs every year, and some basic technology in the country has not been resolved, LED street light is one of the problems to be solved.

The importance of lightning protection is determined by the concept of investment payback period. As the LED light is about twice the price than the traditional street lights, the government at the beginning of the purchase of a larger amount of investment, so the need to save money in the operation of the process to gradually cost to earn back, therefore, LED lamp life is very important. If the LED lights have not earned back yet but during cost of the investment recovery period, they are broken, it also needs to spend money to repair, repair the cost of labor to pay more than double when installed. Thus, in the LED era, to achieve LED power, save money, you need to ensure that its life can meet your expectations, that is, long shelf life of the product. To achieve cost savings, to ensure that during the investment recovery period light is not damaged, you need to pull the reliability. This requires the LED lights plus lightning protection module in order to achieve economic maximization.

China has been doing energy-saving lamps. The definition of the street lamp specifications are usually brightness, light angle, light color, power consumption and other visible indicators, and often ignore the mine that an invisible indicator. Not only the United States and Europe and other countries, in fact, high mine countries, such as Malaysia, India and other countries have long been established to require local street lights through a set of lightning testing standards. As the domestic only Hainan, the Pearl River and other coastal cities of the mine is more serious, and most of the inland areas are much better. Thus, the relevant standards have not yet been introduced.

US three mine standards

In the United States issued the national standard in 2015, it has launched a three-level lightning protection standards. The reason is the three grades, because the United States of States tribal thunder situation is quite different in east and west regions. High thunder area can reach 30 to 40 times, while the low mine area is only 1 to 2 times, and thus made three grades of standards, respectively 6kV, 10kV and 20kV. This also gives a flexible choice for the lighting manufacturers and local governments. Local governments can decide the appropriate standards according to the actual situation.