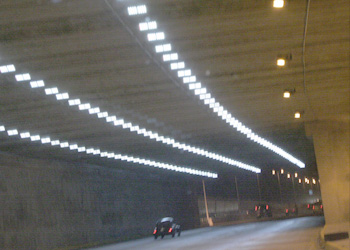 Second, high CRI: general LED CRI is about 70 ~ 80, higher than trichromatic phosphor higher; generally HPS is 20 to 35, low pressure sodium lower, so even the traditional high brightness light source for LED, but the visual effect is worse than the LED, "not the brightest, but to see most clearly," this should be the development of an application of the LED light source direction.

Fourth, price. Although the prices of LED Tunnel Lights are higher than traditional lighting, but with the manufacturing technology matures, its price dropped significantly in constant current, the high and low pressure sodium lamps generally set the price of 2,000 RMB, while its cable and other accessories Price is higher than the LED cable and other expenses.