Led tunnel light is a light efficiency energy saving lamps. In recent years, domestic lighting enterprises, through international cooperation and exchange, actively improve independent R & D capability, greatly promoted the development of China's LED lighting. Energy Saving research of LED tunnel lights has been a major breakthrough, not only improves the efficiency of the LED light source, but also through the design of the LED light research, reasonable times with light, improved the overall performance of LED tunnel lights. 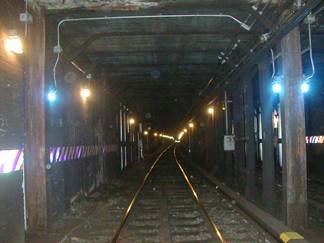 Unlike ordinary road tunnel lighting, LED tunnel light has its distinct specificity, thinking on its safe performance of the lighting system is particularly important.

When design Led tunnel lighting plan, the human response to the bright and dark elements conform should be considered, focusing on the transition section and the transition section lighting design. In order to meet the driver compliance eye, at the tunnel entrance, there needs to be a dark transition lighting to ensure a certain visual requests. Tunnel exit conform to a very short time, the general in less than 1s, so no need to make other disposition.

Tunnel is a blocked space, natural light cannot shine them, in order to ensure the safety of human life for driver and passenger, even though the day also needs its internal artificial lighting, tunnel lighting is an integral part in the tunnel.