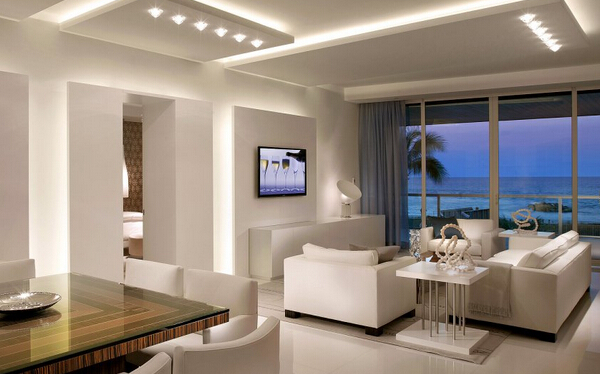 One. Classification by way

Direct LED Lighting: Direct lighting refers to the light emitted by the lamp 90% -100% of the flux is assumed to reach the work surface, resulting in a strong and vivid contrasts of light and shadow effects, can highlight the face of dominant throughout the environment position, mainly for the workplace.

Semi-direct LED lighting: the semi-direct lighting means lampshade made ??of translucent material covering the upper portion of the light source, so that more than 60% -90% of the concentrated light toward the face, Further, there is 10% of the light in the quilt -40 % ratio after translucent shade diffusion diffuse upward. The illumination light generated relatively soft, diffused light up the building can increase the sense of space, mainly applied to lower the height of the room.

Indirect LED Lighting: Indirect lighting is generated by the light shielding means of lighting indirect light, in which 90% -100% of the flux through the ceiling or wall reflex action in the face, the remaining light is less than 10% direct exposure to the work surface. In general, this way of lighting and other lighting methods only in conjunction with the special artistic effects can be achieved, mainly used in shopping malls, clothing stores and meeting rooms.

Semi-indirect LED lighting: lighting the way with respect to the semi-direct, the semi-indirect illumination is a completely opposite way of lighting, specifically, the translucent shade mounted in the lower light, so that more than 60% of light shooting flat , thereby forming an indirect light source, and the remaining 10% -40% of the light down the diffusion through the shade. This approach can produce more obvious lighting effects, so low compared to the increased sense of a certain room. Primarily for residential space in smaller parts, such as the lobby, hallways, etc.

Diffuse LED illumination: diffuse illumination is the use of lighting features to control glare of refraction, which will diffuse the light to spread around. This lighting in general, there are two forms, one is the light emitted from the lamp shade catchy reflection by flat, translucent shade diffusion from both sides, while the lower spread from the grill. Another is to use a translucent shade to produce diffuse light all closed. It is this kind of lighting generates light visual comfort for the bedroom, room, etc.