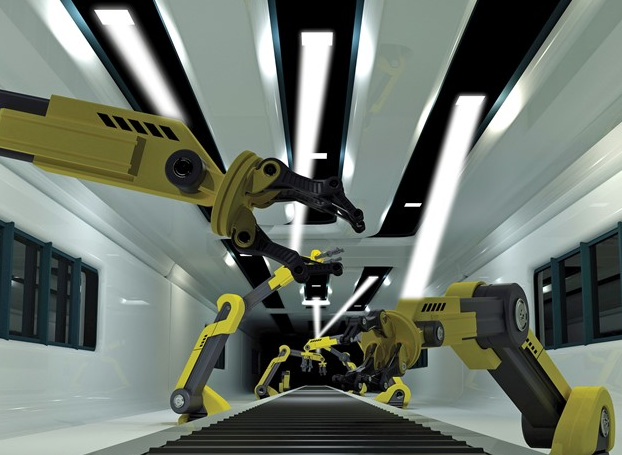 BMW joined forces with the Applied Science Institute Fraunhofer Heinrich Hertz Institute (Fraunhofer HHI) and Osram 3 years ago to be about 5 x 5 meters (about 16×). A 16-foot) factory floor installed a robot to try to pass the car detection information through Li-Fi. In order to be able to accept the signal from the light source, BMW installed six receivers on the robot and eight safety barriers in the factory, allowing engineers to accept robot signals via Li-Fi and issue further instructions.

Whether this multiple-input multiple-output (MIMO) architecture is one of the reasons why they use infrared LED chips instead of ceiling light is unclear, but according to Fraunhofer project coordinator Volker Jungnickel, the MIMO topology does work.

Essentially, this solves the blocking problem of optical wireless links,” Jungnickel said. “The goal of the research project is to improve the technology readiness level [TRL] of Li-Fi in the production environment,” Jungnickel Said. “In the test, we reached TRL 6 for the first time (a total of 9 levels). In order to use Li-Fi throughout the plant, TRL 9 is required. This is the ultimate goal of companies such as BMW. Using this technology is a good way to achieve this. ”

Although the system was used to transmit the detected image of the robot to BMW engineers – the eight photosensitive receivers on the safety barrier communicated with BMW’s central data server, manufacturing instructions could also be sent to the robot.

However, there were several problems at the beginning of the test. The first is that the signal cannot be transmitted smoothly with the beam, so the BMW team switched to another LED driver; the Li-Fi transmission time is too long, sometimes as long as 20 seconds, which is much higher than the industrial communication requirement within 5 seconds. . Therefore, the BMW team replaced the chip set and hoped to meet the required standards.

BMW has not indicated whether it plans to continue developing the technology. BMW project manager Gerhard Kleinpeter said: “Li-Fi can reduce the dense Wi-Fi spectrum burden and provide uninterrupted mobile transmission for the Industrial Internet of Things.”

The BMW pilot project is called “Optical Wireless Network for Flexible Vehicle Manufacturing Units” (OWICELLS) and is part of a broader development program funded by the German Federal Ministry of Education and Research, which aims to promote Wireless communication. The government organization provided 1.6 million euros ($1.86 million) to OWICELLS.

In addition to BMW, the light manufacturer Philips, also applied Li-Fi technology to the French real estate investment company Icade, with a transmission speed of 30Mb per second. A high school in Stuttgart is using the prototype Fraunhofer Li-Fi system, which uses classroom ceiling LED lights to deliver lessons to students’ laptops.

The US company VLNComm developed the first Li-Fi LED lighting panel with a download speed of up to 108Mb per second. Because Li-Fi is faster and safer than Wi-Fi, and is immune to electromagnetic interference or interception, it will have considerable potential for future development in hypermarkets, hospitals or deep-sea diving sensors.