The solar LED street lamp utilizes the photovoltaic effect of the solar cell. During the day, the solar cell absorbs the solar photon energy to generate electric energy, and the electric energy is stored in the battery through the control of the photovoltaic controller. When the night falls or the illumination around the lamp is low, the storage in the battery is stored. The electric energy is supplied to the light source through the control of the photovoltaic controller, and the controller cuts off the light source power after the set time is reached. The solar LED street light consists of the following parts: solar panel, solar LED street light controller, battery pack, light source, light pole, and lamp housing. 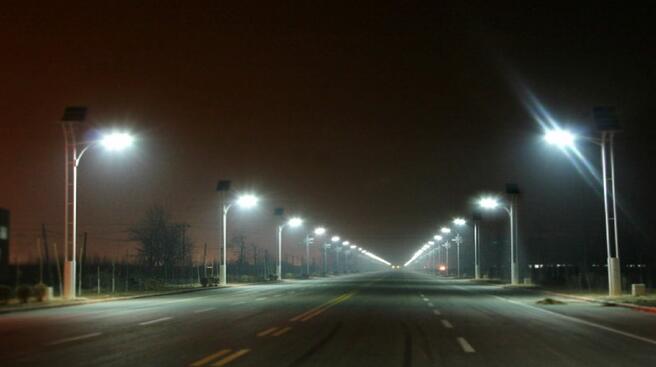 For silicon solar cells, under standard conditions (spectral illuminance: 100 W/m2, spectrum: AM 1.5, temperature: 25 ° C), its open circuit voltage is 0.48 to 0.6V. A plurality of single-cell solar cells is connected and packaged to form solar cell modules of different areas and different powers, which may also be collectively referred to as solar panels. Monomer solar cells are generally unusable, and practical applications are solar cell modules.

Regardless of the size of the solar luminaire, a good performance charge and discharge controller is essential. In order to extend the life of the battery, its charging and discharging conditions must be limited to prevent overcharging and deep charging of the battery. In places with large temperature differences, qualified controllers should also have temperature compensation. At the same time, the solar controller should have the function of street light control, with light control and time control functions, and should have the function of automatic cutting and controlling load at night, which is convenient for extending the working time of solar LED street lamps in rainy days.

For any solar lighting system, the advantages and disadvantages of the charge and discharge control circuit will directly affect the success or failure of the system application. Since the input energy of the solar photovoltaic power generation system is extremely unstable, in the photovoltaic power generation system, the control of charging the battery is more complicated than the control of charging the battery by the utility charger. A good performance photovoltaic controller should have various protection functions such as controlling battery charge and discharge, temperature regulation, maximum power tracking, and overcharge protection, over discharge protection, short circuit protection, reverse connection protection, and automatic switching and time adjustment functions. The system operates reliably, and the photovoltaic controller also has the function of outputting the maximum power that enables the solar cell module to be intelligent at different temperatures and different solar irradiation conditions, so that the solar photovoltaic system has high efficiency.

Since the battery charging of the solar photovoltaic system is directly provided by the solar battery, the obtained energy is extremely unstable, so it is necessary to configure a battery with reasonable capacity and reliable performance to ensure the normal operation of the solar photovoltaic system. In solar photovoltaic lighting systems, maintenance-free lead-acid batteries are usually used. The maintenance-free lead-acid battery adopts full sealing mode, high discharge rate, and stable characteristics; no need to add water; simple installation, small footprint, horizontal and vertical installation; life expectancy is generally 5-7 years. The general principle of selecting the battery capacity is: firstly enough to meet the night lighting requirements, and can store the energy generated by the solar module during the day as much as possible, while also meeting the electrical energy required for continuous rainy night lighting. The battery capacity is too small to meet the needs of night lighting. The battery capacity is too large, the battery is in a deficient state for a long time, shortening the battery life, and also wasting unnecessary investment.

Since the operating current of the LED is DC, the operating voltage is low. Solar cells convert light energy into DC power, and solar cells can be combined in series and parallel to obtain the actual voltage required. These features just match the LEDs. The combination of the two will achieve high energy efficiency, high safety performance, and reliability, and achieve a perfect combination of energy-saving, environmentally friendly, safe and efficient lighting systems. The LED street light head is shown in Figure 1.

The key to the perfect combination of solar photovoltaic technology with LED lighting is that both are DC, low voltage and can match each other. Therefore, the combination of the two does not need to convert the direct current generated by the solar cell into alternating current, thereby greatly improving the efficiency of the entire lighting system. At the same time, the use of batteries to store and release energy, making its advantages more obvious. With the in-depth study of related technologies, the luminous efficiency of LEDs is constantly improving. The advent of ultra-high-brightness LEDs will inevitably replace ordinary lighting electric light sources and can save a lot of energy and no pollution.

LED lamp has a long life, up to 1000000h, low working voltage, no need for the inverter, high light efficiency, etc., domestically produced is 50lm/W, imported is 80lm/W. As technology advances, the performance of LEDs will increase further. The LED lamp is a new type of lighting method that realizes lighting demand by illuminating LED module with DC low voltage. It has the characteristics of high brightness, good color rendering, etc. In addition, since the input of the LED street lamp is low voltage DC, it can be combined with a solar cell. In combination, LED as a light source for solar LED street lamps will be a trend in the future.