German automaker Audi has long been the most enthusiastic player in the auto industry to use OLEDs in taillights. The company has repeatedly emphasized that this technology has the dual advantages of design and safety, from which it can be seen that its obsession with the design of OLED taillights. And now, Audi has one more reason to support OLED automotive lighting: it may become a new source of revenue for it. 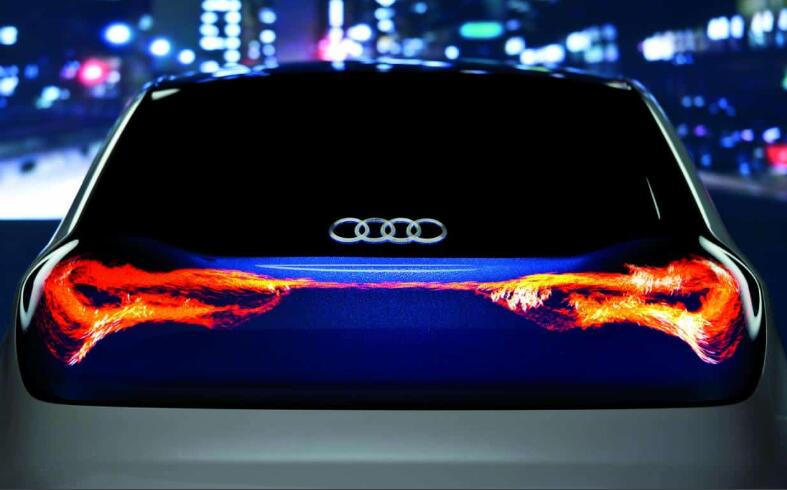 In a recent online discussion with its OLED supplier OLEDWorks, Audi's head of lighting development, Stephan Berlitz, hinted that Audi could offer far more than the four dynamic design options it currently offers, and that it could expand the technology to include In addition to the three models currently used.

It is reported that in 2017, Audi launched OLED taillights as an option for its A8 luxury models, using Osram products at that time. But the two companies gradually parted ways as Osram weakened its investment in the technology. Since then, Audi has partnered with an Asian supplier and OLEDWorks in Rochester, N.Y., which Audi declined to name.

Today, drivers of Audi's high-end S8 limousine can even switch back and forth between four geometric headlight control appearances -- Audi calls them "signatures" by tapping the controls of the vehicle's multimedia interface (MMI) system. , with high brightness and dark contrast.

That will continue as Audi expands its stable of "iconic designs." At the same time, according to Berlitz, Audi is also considering mobile phone-based control, and the digital nature of OLED panels makes this control possible.

In contrast, LEDs are only light-emitting diodes with single-point light sources. Although the price is lower, the space to play in the design of automotive taillights is very limited. Although LED is currently superior to OLED in terms of luminous life and manufacturing cost, the cost gap between the two is gradually narrowing.

Seeing these advantages become more and more obvious, Audi is considering offering access to all "iconic designs" for a fee. Berlitz told OLEDWorks CEO David DeJoy: "In the future, we certainly want customers to choose these options, perhaps with on-demand features to choose these iconic designs." These lights use the world's advanced multi-layer OLED technology, considering it How it works, Berlitz thinks the cost of these iconic designs could be "a dollar at a time, maybe $50 a month, $200 over the lifespan."

Will there really be a market for this kind of automotive lighting products? In the premium car market, the answer is yes, according to Michael Kruppa, head of Audi's lighting innovation department. Also, luxury car owners may want some personalization, and these logos can be just one of the designs that meet their needs.

Currently, Audi's OLEDWorks OLED taillights not only offer a bespoke look, but also flash their warning signs to alert following drivers to various situations and hazards, such as icing, traffic jams and keeping distance. Earlier this year, the company demonstrated the feature at the Consumer Electronics Show (CES) in Las Vegas.

In May of this year, Audi launched the new A8 equipped with OLED automotive lighting, and carried out a new design for the shape and function of the rear light source, which has also become a new bright spot in the automotive manufacturing design industry. Currently, Audi currently offers 4 vehicle lighting patterns on its S8 limousine, a more powerful version based on the previous A8 limousine configuration, which offers 3 "signature designs". Audi's subsequent marketing material clarified that there were four on the S8 version of the A8, compared to three on the previous A8.

Today, the technical difficulty of OLED taillight application has achieved a breakthrough, and high-end automobiles are bound to usher in new progress in exploring OLED automotive lighting. At present, several automakers (including Audi, Mercedes-Benz, BMW, Bugatti and Hongqi) have begun to adopt OLED lighting solutions on their car taillights, some as optional modules. In the future, it is expected that more high-end cars will use OLED taillights as standard components to bring drivers a better feeling and experience, thereby enhancing the competitiveness and added value of their own automotive products.