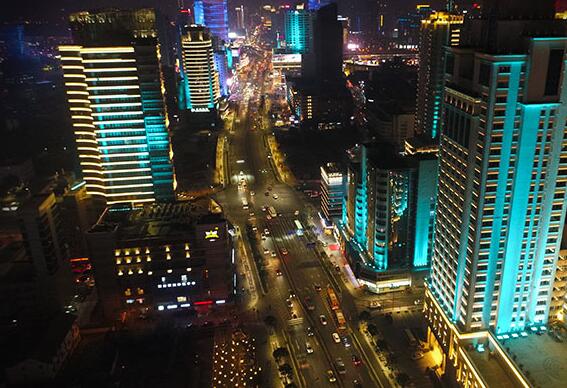 Signify’s branded Philips lighting fixtures, which perform the renovation of the lighting project, bring together tunnel design experts to accurately design light brightness adjustments and illumination angles that meet the needs of users, so as to obtain parallax and smooth driving when driving in and out of the tunnel.

Among them, the underpass of Keelung Road has a common lane for steam and locomotives, and there is a confluence and shunt gate inside. In addition, the location in the urban area has a large traffic volume and a high risk of accidents. The relative lighting requirements will be more stringent. According to the CIE088 tunnel lighting standard of the International Commission of Illumination, a complete intelligent tunnel lighting system that can dynamically adjust the brightness of the tunnel according to the degree of sunlight outside the tunnel is designed to improve the adaptability of the eyes of the driver in and out of the tunnel, and make safety more in place.

Signify said that the 8 tunnels that have been renovated in Taipei City include the Minquan Tunnel, the Jinlong Tunnel, the Huai'en Tunnel, the Kangle Tunnel, the Zhuangjing Tunnel, the Xinhai Tunnel, the Dahu Tunnel, the Antai Tunnel and the Keelung Road Underpass. The 3996.5 meters, a total of 4,080 sets of LED tunnel lights connected in series with Philips Baselogic and TunneLogic systems are installed. It is a large-scale LED tunnel light project in China. The comfortable visual effect effectively avoids the dazzling and flickering of the driver caused by the unfriendly light source, and greatly improves the safety and comfort of tunnel traffic.

In addition, the replacement of the Philips smart lighting system is estimated to save 3.43 million kilowatt-hours of electricity in one year, which is equivalent to 6864 air-conditioners and a reduction of 2,100 metric tons of carbon emissions. Compared with traditional sodium lamps, the total electricity consumption of LED tunnel lighting has been saved by more than 50%, and the actual electricity consumption has dropped by 70%, which has become a reference for other counties and cities in China to improve road lighting.

Dr. Wu Jianliang, director of the Department of Ophthalmology at Taipei Wanfang Hospital, said: "Old-style fluorescent tubes or traditional light bulbs have uneven illumination. They are too bright or have the wrong color temperature and are prone to glare reactions. Research has found that appropriately designed LED light sources are more effective in driving simulation studies. A short reaction time can improve driving safety.” Dr. Wu Jianliang further stated: “Human vision has different functions during the day and night. The pupil of the eye can be analogous to the aperture of a camera, and the amount of light entering the eye can be adjusted. The retina is just like that. Like the film of a camera, especially the retina, there are two different photoreceptor cells: cone-shaped cells and rod-shaped cells can respectively perceive bright and dim environments. The process of adapting the eyes from light to dark is called dark adaptation. It also requires time to adapt from dark to bright. If the light changes too much when driving in and out of the tunnel, it will make the eyes too late to adapt, causing temporary blurred vision or black hole phenomenon, affecting the vision and psychology of driving, and causing traffic accidents. Therefore, when entering a darker area, if the light source can adjust the illuminance in the tunnel at any time according to the daily illuminance outside the tunnel during the day and night, it has a smart lighting method that conforms to the adaptation curve of the human eye, and the driver’s eyes do not need. After going through a period of adaptation when entering and exiting the tunnel, the driver feels psychological and visual comfort, and the traffic can be maintained smoothly and a high degree of safety can be ensured."