On the evening of June 16, the main stadium of the Wenzhou Olympic Sports Center, which was under construction, was brightly lit, and the first lighting test was carried out that night. Gorgeous lights shining in the night sky, the light is emitted from the 138 ETFE membrane structure skylights on the east and west sides of the main stadium, like a galaxy in the sky. 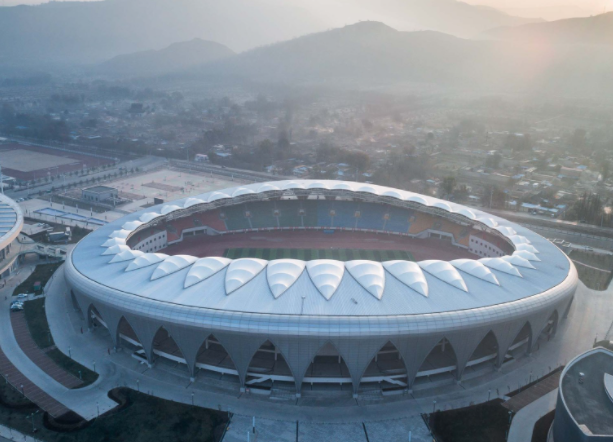 From the outside, the main stadium at night resembles a sailing ship sailing, or a flying saucer, looking down from the sky, it resembles a seagull just soaring. Standing on the green lawn in the 50,000-seat main stadium, it is as if you are the star that has attracted much attention-more than 400 days later, the group stage of the 2022 Hangzhou Asian Games football match will be staged here.

What is the progress of the main stadium of Wenzhou Olympic Sports Center? What are the intelligent high-tech applications? The reporter will give you a sneak peek.

The finalization construction is underway. The completion acceptance will be organized at the end of July

The second phase of the main stadium of Wenzhou Olympic Sports Center in Yongzhong, Longwan consists of a 50,000-seat main stadium, a supporting standard outdoor 400-meter track and field training field on the west side of the main stadium, and other supporting outdoor projects. At present, the project has completed the main project, steel structure, metal roof, interior decoration, mechanical and electrical installation, fire protection, intelligence (including sports technology equipment), elevators, and other special inspections and acceptances, and completed the complete acceptance of the main project at the end of March this year.

On the evening of June 16th, the reporter came to the construction site of the main stadium of the Olympic Sports Center. The stone paving of the square around the stadium was basically completed. Several workers were finishing the construction. The pipe network of the outdoor landscape accessory project was completed, 10 meters high. The trees have been planted.

Walking up the steps from the North Plaza to the second floor, you can see the inside of the main stadium in a magnificent manner, with 50,000 seats distributed on the two-story stands. At present, the construction of all the seat frames has been completed. Some seats have been installed in the grandstand on the first floor, and the grandstand on the second floor has not been installed yet. Under the lights, the main stadium is spacious and bright. 4 large color screens are hung on the four corners. The green lawn in the center has been paved. Several workers are laying rubber on the runway around the football field. The same size training is on the west side of the main stadium. The lawn has also been paved, and rubber will be laid for the runway soon.

According to the relevant person in charge of the Engineering Management Department of Wenzhou Sports Investment Group under the City Chengfa Group, the 4 large LED screens to use P10 full-color displays, with a single block size of 13.31 meters in length and 7.68 meters in width. They are made in China-the world’s leading It is produced by Yade Optoelectronics Co., Ltd. The company’s LED full-color display has a global reputation for brand awareness, product advancement, and quality stability. More than 80% of the optoelectronic products for the 2008 Olympic Games, the 50th, 60th, and 70th anniversary of the founding of New China, Tiananmen National Day With the screen, the general contracting for the opening and closing of the 2019 Wuhan Military Games is the production and construction of the company. The display has a variety of signal displays and control millisecond response speeds, which can meet the real-time requirements of the Asian Games.

The person in charge said that he is currently docking with the venue construction department of the Asian Organizing Committee to carry out special acceptance work for sports crafts such as professional lighting, large screens, sound reinforcement, and timing and scoring. It is expected that all seats will be installed by the end of this month. In addition, workers are planting shrubs in the outdoor square, and the outdoor landscape auxiliary project is expected to be completed in mid-July, and the project will be completed and accepted at the end of July.