Chinese plant factories "light up" the way for capital

Plant factories that are not affected by the environment and can supply fruits and vegetables nearby are heating up. Yang Qichang, chairman of the National Smart Plant Factory Alliance and chief scientist of the Chinese Academy of Agricultural Sciences Smart Plant Factory, told China Business News on January 20 that China has become the fastest growing country for plant factories in the world, and China has plants of various scales by the end of 2020. There are more than 220 factories. 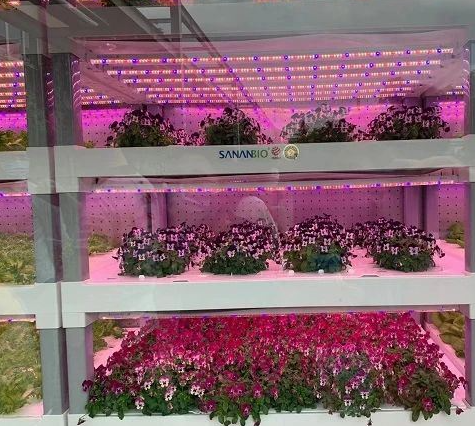 Plant factories and plant lighting have become hot spots for investment by LED companies. The industry predicts that the global LED plant lighting system market will exceed US$2 billion in 2021. National Star Optoelectronics (002449.SZ) announced last week that it has formed a solution for the LED plant lighting system. The unmanned vertical agricultural production system of Fujian Zhongke Biological Co., Ltd. (referred to as Zhongke San'an) is about to complete the pilot test and enter the stage of promotion and application.

Li Shaohua, a researcher at the Institute of Botany of the Chinese Academy of Sciences and dean of the Sananguang Bio-Industry Research Institute of China Science and Technology, told the CBN reporter that the era of unmanned smart plant production is coming, with great potential and great challenges.

A few years ago, CBN reporters visited Osram's headquarters in Munich, Germany, to visit its smart plant lighting solutions. When entering the Zhongke San’an Plant Factory in Hutou Optoelectronic Industrial Park, Anxi County, Quanzhou City, Fujian Province on November 13, 2020, a reporter from China Business News found that China’s indigenous plant lighting and plants have developed rapidly in recent years, with scale and industry of transformation is no less than that of foreign-funded enterprises.

Zhongke San'an was established as a joint venture by the Institute of Botany, Chinese Academy of Sciences and Fujian San'an Group in 2015. It is the layout of San'an Group in the photobiological industry after optoelectronics and optical communications. The project design investment is 7 billion RMB, including the planned construction area. The 200 acres of plant factory research institute and the 300 acres of plant factory industrialization base has been built, the bases are located in Quanzhou, Fujian, Lu'an, Anhui and Las Vegas, USA.

According to Li Shaohua, China Science and Technology San’an Quanzhou Base has built several 10,000 square meters plant factories, each with more than 3,000 square meters and three floors. He also pointed to a container on the side of the road with lights and flowers planted in it and said, “This is a plant factory transformed from a container. We only pick flowers, usually two cents per flower, which are edible for the restaurant. I have to pick a lot of color pansy in a day, and the picking is long."

The CBN reporter learned that the bagged vegetables from the Zhongke San’an Plant Factory have been marketed in Xiamen, Fujian and other places. The varieties include cabbage, dance skirt lettuce, green butterfly lettuce, iced vegetable, pansy, etc., generally one pack 150 grams, the price is nearly ten RMB. Its plant factory also planted medicinal materials with higher economic value, such as Anoectochilus and Dendrobium. Due to the special light formula, the planting time was shorter and the medicinal effect was better.

In Li Shaohua’s eyes, a plant factory must have the following characteristics. One is to grow crops in the house, which does not count as a greenhouse; the other is artificial light sources, and natural light does not count; and the third is vertical agriculture, multi-layer cultivation, and the production environment and conditions are all. It is manually controlled. "In the past two or three years, we have built a plant factory of more than 100,000 square meters. Small projects sell equipment directly, and large projects can buy technology shares."

National Star Optoelectronics has also invested in the field of plant lighting for many years. In January this year, it launched a high-efficiency plant lighting LED series, including monochromatic light series LEDs covering different wavelengths from 380 to 760 nanometers, non-continuous spectrum and continuous spectrum excited by phosphors. Full-spectrum series and sunlight-type full-spectrum series LED products meet the different spectrum needs of plants and can be customized according to customers' spectrum needs.

In fact, under the epidemic situation in 2020, China's agricultural plant lighting market will grow rapidly, because artificial lighting cultivated vegetables are free of pesticides and pests and can relatively reduce the impact of logistics on vegetable supply. A reporter from China Business News learned at the Guangzhou International Lighting Exhibition in October last year that Signify has set up pilot projects in Sichuan, Wuhan and Shanghai. Osram’s plant lighting business in China increased at least three or four times last year.

The epidemic has also greatly increased the sales of Japanese plant factories, because foreign vegetable imports once stagnated, foreign laborers were unable to enter Japan, and many farmers encountered difficulties in harvesting crops. According to Fuji Economic Research, the average annual demand for lettuce in the Japanese market is 550,000 tons. In 2019, plant factory shipments were 17,000 tons, accounting for only about 3% of the demand. It is estimated that by 2030, lettuce shipments from plant factories will reach 62,000 tons, accounting for more than 10% of demand.