The "Ice Ribbon" of the National Speed Skating Hall, the iconic venue of the Beijing Winter Olympics, lights up

With the completion of the main structure and interior decoration of the National Speed Skating Hall "Ice Ribbon" and the official power transmission of the venue, the venue has recently launched the external floodlighting and venue lighting commissioning. This iconic venue for the Beijing Winter Olympics has revealed its latest appearance. Content. 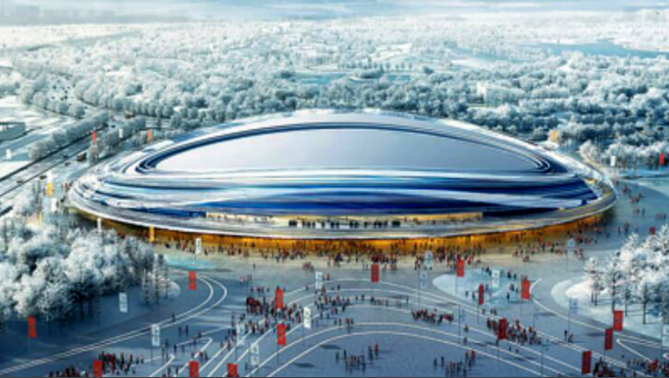 On the evening of the 15th, the National Speed Skating Stadium in Beijing’s Orson Park was like a “pearl” lighting up the night sky. The 22 fa?ade "ribbons" first present the expected countdown numbers, and then use blue light and shadow to simulate the flowing picture of speed skaters galloping on the track, with elegant and smooth visual effects.

A few seconds later, the fa?ade of the National Speed Skating Stadium showed animated scenes such as falling snow and fireworks. It is reported that these test results are only partial "spoilers". The venue has designed multiple display modes for the Olympics, celebrations, and weekdays. In the future, the display effects can be customized according to the different functions of the venue.

With the start of the lighting commissioning of the venue, the interior lighting of the National Speed Skating Stadium has also been initially unveiled. Under the warm white light, the huge multifunctional ice area and stand area of the venue are unobstructed. The already-built ice concrete base layer is wide and flat, waiting for the first ice making on this largest all-ice surface in Asia.

The reporter learned that this venue lighting system is carefully designed according to venue functions and consists of 1088 sets of LED lamps. Its optical parameters meet the requirements of top-level event hosting and high-definition broadcasting, and its energy-saving and environmental protection performance is outstanding. Each set of lamps realizes intelligent and independent control to meet the rich lighting needs of venues for multi-functional use during and after the game.

According to the person in charge of the National Speed Skating Stadium, the official power supply of the stadium has laid a solid foundation for the completion of the stadium. The electromechanical and ice-making systems of the stadium have also been debugged simultaneously. At present, the venue test run team has entered the venue to work.