In recent years, with the introduction of the concept of smart cities 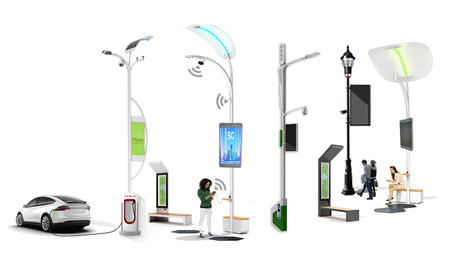 , many cities in my country have set off a wave of building smart cities. Subsequently, the “14th Five-Year Plan Outline” was issued, which pointed out the construction of smart cities and digital villages, boosting urban and rural development and innovation of governance models with digitalization, and comprehensively improving operational efficiency and livability. As an important “role” in the construction of smart cities, smart street lights can be expected to have a lot of room for development, and LED light pole screens, as important supporting equipment, will usher in greater opportunities.

In the process of building a smart city, it is actually not difficult to find. Smart street lights are like a huge “spider web”, which can be described as “extending in all directions” and can be effectively integrated into various environments of the city. As an important information release terminal, the LED light pole screen plays a more important role in this “spider web”: it uses the advantages of “interconnection of all things”, plus its own functions and other functions, as the information for building a smart city. Important front-end entry for acquisition.

It is worth mentioning that the LED light pole screen has been implemented in more scenarios through the intelligent trend, and it is slowly covering the old and old traditional information dissemination methods and gradually becoming the mainstream application of information dissemination in the era of wisdom. Taking the LED light pole screen as the main entry point, using its precise market positioning and unique innovative perspective, it is further integrated into the smart street light and smart city construction phalanx.

Of course, LED light pole screens are not only outstanding in smart construction. With the introduction and advocacy of a series of national policies, LED light pole screens, as a carrier with more compatibility and scalability, are supporting street light poles. The application form of the smart city is well known to the public, and with the popularization of the concept of building a smart city around the world, the overseas application market is gradually expanding.