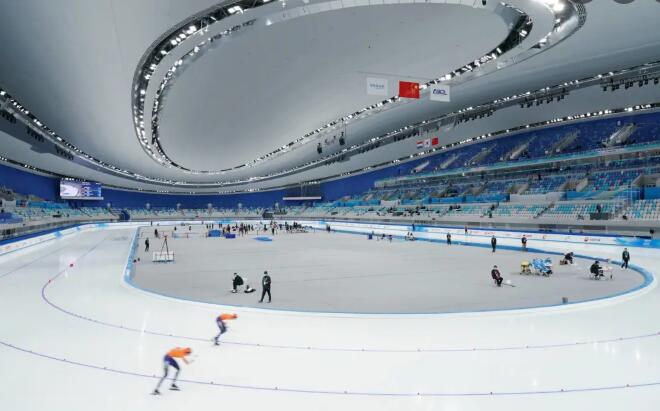 The National Speed Skating Hall has a construction area of about 80,000 square meters and can accommodate about 12,000 spectators. The National Speed Skating Stadium can be used for ice hockey, curling, and avenue speed skating. It is a comprehensive venue. As the venue for the speed skating competition on the Avenue of the Beijing Winter Olympics, the venue has the largest all-ice design in Asia, with an ice surface area of 12,000 square meters. After the Winter Olympics, the venue will be open to Beijing citizens, providing a training ground for athletes. It can also meet the needs of Beijing citizens for winter sports. It can operate 365 days without interruption and become a sports and fitness venue similar to the Water Cube and Bird’s Nest, which has both social service functions and corporate operations.

The design concept of “Ice Ribbon” comes from the idea of combining ice and speed. The 22 ribbons are like the traces of athletes sliding over, symbolizing speed and passion. The National Speed Skating Hall adopts the single-layer two-way orthogonal saddle-shaped cable net roof with the largest span in the world, and the amount of steel used is only a quarter of that of the traditional roof.

The National Speed Skating Stadium is the first Winter Olympics speed skating venue in the world to use carbon dioxide transcritical direct cooling ice-making technology. This technology is the world’s most advanced and environmentally friendly ice-making technology, with the carbon emission value approaching zero and the energy efficiency of ice-making greatly improved.

After the game, the ice surface can be cooled in different regions, and the temperature of each piece of ice can be controlled individually to realize the “simultaneous operation and different use” of the venue. Two key design schemes, the integrated design of the ice-making system and the design of the ice plate structure have been patented.

In order to create the “fastest ice”, the construction of the ice slab of the National Speed Skating Hall kept improving. It took more than 60 days to complete the welding of 8574 welds of the ice-making steel pipe. The level difference of the produced concrete ice slab is about 4 mm, which is very flat; The temperature difference between the ice surface is controlled within 0.5 degrees Celsius, which is beneficial for athletes to create good results.

The venue lighting system of the National Speed Skating Stadium is tailored according to the functions of the venue. It consists of 1088 sets of LED lamps. Its optical parameters meet the requirements of top competitions and high-definition broadcasts, and the energy-saving and environmental protection performance are outstanding. Each set of lamps realizes intelligent independent control to meet the rich lighting needs of multi-functional use during and after the game.